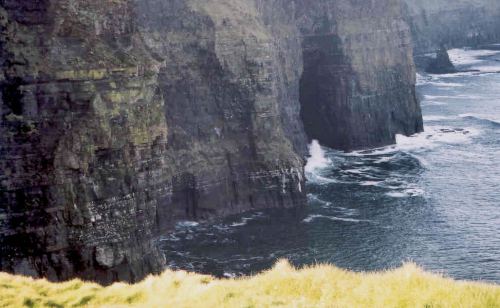 Continuing the Irish 2002 travelogue, onward to the next leg of our Irish tour:

Day two of our tour started with a the bus leaving a bit late and that continued to be the order of the day.  There was always at least one person that kept us waiting and invariably it was one of the group of  women traveling together from New York City. They were lovely people, most of them work together in a hospital as Anesthesiologists. And they were astonishing shoppers! That’s usually why they were late!

We drove west towards the Atlantic coast under again sunny skies. Really lucky there because the view of the 600 foot high Cliffs of Moher on Liscannon Bay would have been disappointing under cloudy or  foggy skies or even just that hazy type of sunny day you often get on the coast.

We were the first…